This section will introduce the ideas behind what are known as Monte Carlo methods.

Motivation and a bit of history

There are some problems in science that are so complicated that they just can’t be analyzed by formulas that you can write down on a piece of paper. This is particularly true in biology and health sciences because the problems are so complex. One example is the folding and shape of proteins.  This is famously a very difficult problem. How do you solve such problems? Well, one technique is to use probability, random numbers, and computation. These methods are known as Monte Carlo methods.  They are named after the town of Monte Carlo in the country of Monaco, which is a tiny little country on the coast of France which is famous for its casinos, hence the name. These methods rely on computers to simulate the results and these were first really used in the Manhattan project in a serious way. Now, however, they are used in all fields: understand systems like:

All of these different fields use Monte Carlo methods to gain a deeper understanding of complex problems.

As a first example of how Monte Carlo methods work, we’re going to do something maybe a little silly and calculate

. To see how we can do this using Monte Carlo: 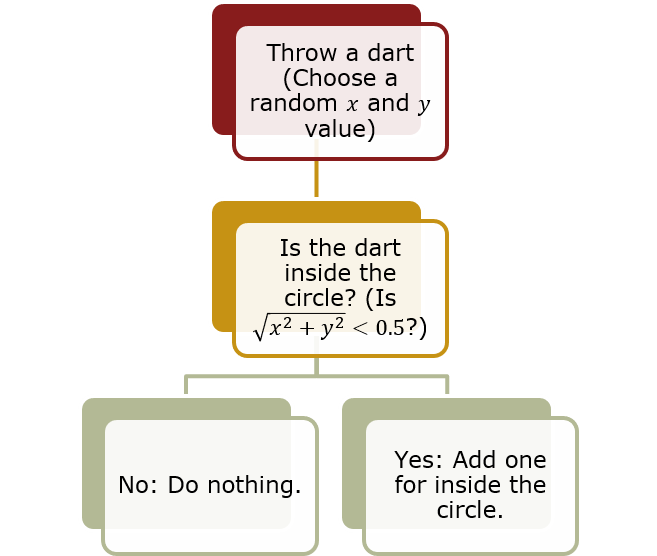 Folding proteins, is as described earlier, a famously difficult problem. Now, we will go through how you can use Monte Carlo methods to solve protein folding. The example I’m going to go through here is a simplified version of the method described in Earl et al.[1].

Below, you can see this method in action. You can see that this is a Monte Carlo simulation of a polypeptide chain and the author starts with all the atoms in  basically a straight line and then runs the simulation. You can see they’re jiggling around at random. As each atom randomly moves, the computer is calculating the energy and leaving the atoms if the energy is lower and sometimes even if it is higher. Run this run for hundreds of thousands of computations and ultimately it settles down into what is actually the correct answer for this polypeptide chain!