Editors’ note: This section is based upon work from[1]

To become a biologist or health-care professional, you have to study a variety of scientific disciplines — biology, chemistry, physics, and math. You might have noted that the world doesn’t actually divide itself in this way. Rather, the disciplines historically have been a way of choosing a sub-class of the phenomena that occur in the world and looking at a particular aspect of them with a particular purpose in mind. Different disciplines have different sets of tools and ways of knowing. Looking at something from different disciplinary perspectives adds a richness and depth to our understanding — like taking two 2-D pictures and merging them into a 3-D image.

Your introductory science and math classes often provide you with some basics — tools, concepts, and vocabulary — but may not give you a perspective on what each discipline adds to what you are learning and how they all fit together. Each discipline has its own orientation and perspective towards the development of a professional scientist. Here’s a brief (and oversimplified) overview of the different disciplines that you encounter in studying biology.

Chemistry starts with the idea that all matter is made up of certain fundamental pieces – atoms of about 100 different kinds (elements) – and is about the ways those elements combine to form more complex structures – molecules. But chemistry is not just about building molecules. It’s about what you can do with that knowledge in our macroscopic world.

For a chemist, most of what happens in biology is “macroscopic” – there are lots and lots of atoms involved – even though you might need a microscope to study it. In introductory chemistry you often assume that reactions are taking place at standard temperature and pressure (300 K and 1 atm).

The goal of physics is to find the fundamental laws and principles that govern all matter — including biological organisms. Those laws and principles can lead to many types of complex and apparently different phenomena. Physics as traditionally taught at the introductory level tends to explicitly introduce four scientific skills that may seem different to what you see in introductory biology and chemistry classes, but these four skills will prove valuable for your career.

This way of doing science is a bit different from the way biology is often done — but elements of this approach and the constraints imposed on biology by the laws of physics are becoming increasingly important both for research biologists and health-care professionals. For more discussion, see the page, What Physics Can do for Biologists.

Math is a bit different from the sciences. In its essence math is about abstract relationships. Since math is about abstract relationships and how they behave, it’s not “about” anything in the physical world. But it turns out that a lot of relationships in science can be modeled by relations that obey mathematical rules, often very accurately. (If you think this is surprising or strange, you aren’t alone. For fun, take a look at the interesting article by the Nobel Prize-winning nuclear and mathematical physicist, Eugene Wigner, entitled, “The Unreasonable Effectiveness of Mathematics in the Natural Sciences.“)

Math as taught in math classes often is primarily about the abstract relationships — learning how to use the tools of math. Making the transition to using math in real-world situations may be quite jarring as there are now additional things to pay attention to other than the math itself — such as figuring out how the elements of the real-world system get translated into a mathematical model and worrying about whether the mathematical model is good enough or not. I like to think of it this way: in math class you learn the “grammar” of the language of science. Here, and in your other science courses, you need to start learning “vocabulary.” With grammar and vocabulary together, you can begin to describe the Universe.

Bringing these disciplines together

Bringing these all together to permit coherent and productive thinking is a challenge! In this class we expect and encourage you to bring to bear knowledge you have from your other science classes — to try to see how they fit together, support each other, and to learn to identify when a particular disciplinary approach might be most appropriate and useful.

While these different scientific disciplines are all ultimately working to the same end: understanding the Universe. They did evolve semi-independently historically. As such, there are cultural differences between the sciences just as there are cultural differences between countries (driving on the right or left, for example). These cultural differences are not about “right” or “wrong” ways of doing things. They are just different. In fact, these differences in perspective are a strength! The different viewpoints between disciplines have often led to many important discoveries throughout history and are still where many of the most exciting advancements are being made. They can, however, be confusing. We have, therefore, worked with biology, chemistry, and mathematics instructors here at University of Massachusetts – Amherst. These discussions have resulted in some common language used in this book, which might, therefore, be different than in other physics text you may look at. Even so, there are sometimes places where we need to leverage the strength of a different viewpoint. We will point out these differences using boxes like the one below. 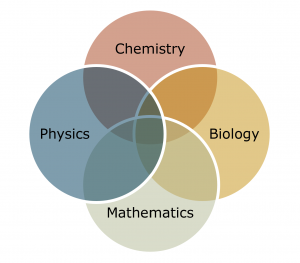 We will use boxes like this to point out important differences between disciplines. Again, these differences are not “right” or “wrong” ways of doing things. They are simply artifacts of the different sciences evolving independently for centuries with influences from different cultures from across the globe.