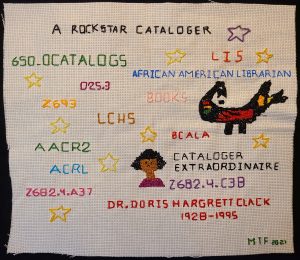 Michele T. Fenton is a catalog librarian at the Indiana State Library in Indianapolis, Indiana.

This embroidery is about Doris Hargrett Clack, who was an expert in cataloging and classification. It says “A ROCKSTAR CATALOGER” at the top, with a stitched portrait and “Dr. Doris Hargrett Clack 1928-1995” at the bottom. Also included is the stitched logo for the National Conference of African American Librarians. The piece celebrates Clack’s legacy and is filled with stars and terms to describe her and her achievements: