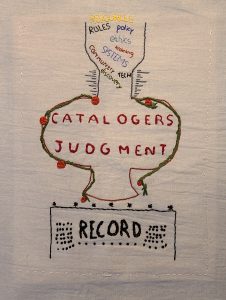 “Many think of cataloging as simply following a series of baroque rules. I wanted to highlight all the considerations that a cataloger has when making a record, and the human element that influences all the resulting work.”

Margaret Joyce is the Hawaiian materials cataloging and metadata librarian at the University of Hawaiʻi in Honolulu, Hawaiʻi.

This embroidery is of a funnel. At the top of the funnel are all of the considerations a metadata professional might have when creating a record, including resources (such as time and money), rules, policy, ethics, training, systems, community, tech and discovery. All of that (and so much more!) goes into a large middle section called Catalogers Judgment, where a cataloger applies and thinks about all of these external rules and ideas to create the RECORD a user sees in the library’s online catalog, which allows them to find the item on the shelf.