Unseen Labor is an international library community-organizing embroidery project created by Ann Kardos, a metadata librarian at the University of Massachusetts Amherst. Metadata work is not typically seen as creative work, but work that is guided by national standards, best practices, policies and guidelines in order to produce and maintain standard records for library resources that can be shared between institutions and vendors. Metadata librarians and catalogers create and maintain millions of library resources for our patrons, with whom we may rarely (if ever) interact, and we provide valuable backend support for our front-facing colleagues.

Ann conceived of the project to ask library cataloging and metadata professionals to examine their stories and experiences centering unseen labor, both physical and emotional. It was posted on three metadata and cataloging listservs in the fall of 2021 and received a great response. There are approximately 60 metadata creators following the project, from all over the United States (including Alaska and Hawaii), Canada and the United Kingdom. The group represents a wide variety of libraries and services, including academic, public and museum libraries, archives and non-profit library groups. Contributors were asked to create a cross stitch or embroidery piece that would share a story about unseen labor, experiences in our libraries, our work, projects we’re proud of and more. The project has since grown into an active online community. The group keeps in contact through an email list and Instagram, and several members have also created a Zoom stitching group that is now affectionately known as The Library Guild. The stitched pieces submitted for this project will be on display in the Science and Engineering Library at UMass Amherst during the Spring 2022 semester.

About the instigator & curator 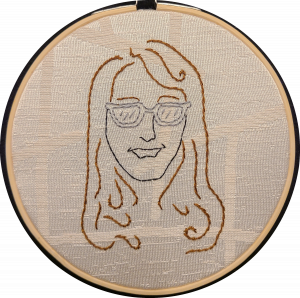 Ann Kardos is a metadata librarian at the University of Massachusetts Amherst. Ann’s first love is film, and she studied video production and screenwriting at Syracuse University. After her undergraduate degree, she went on to complete a professional culinary certification in Denver, Colorado. For several years, she worked for small documentary film makers during the day and in kitchens by night! She later moved to Boston and received her Masters in Library Science in 2008. In her spare time, she has studied oil painting and photography, but these days, she works in cross stitch and embroidery.

Ann began cross stitching as a child, but her mom always told her how many stitches to make on each row. She stopped stitching because the kid-friendly patterns, like snowmen or teddy bears, were not her style. A friend suggested she start cross stitching again during the COVID-19 pandemic as a way to prevent chaos and panic from taking over her mind. Finding contemporary patterns more enjoyable than those she stitched as a child, she began to stitch a lot to pass the time. She then taught herself to embroider by watching YouTube videos. Ann enjoys stitching a variety of patterns, from swear words to modern floral wreaths and more. She also designs some of her own patterns and is expanding her knowledge of stitching techniques. From November 2021 through February 2022, Ann had one of her original embroidery pieces on display at the National Liberty Museum in Philadelphia, as part of the Badass Herstory exhibit curated by artist and activist Shannon Downey, who goes by the name Badass Cross Stitch.

Throughout her career, Ann has worked in a variety of libraries and archives. She came to UMass in 2017, where she works as part of a small team of dedicated individuals, supporting access to approximately 10 million records in the Five College Catalog. She creates, maintains, enhances, edits, reviews and uploads thousands of records each month. You have probably never seen her.