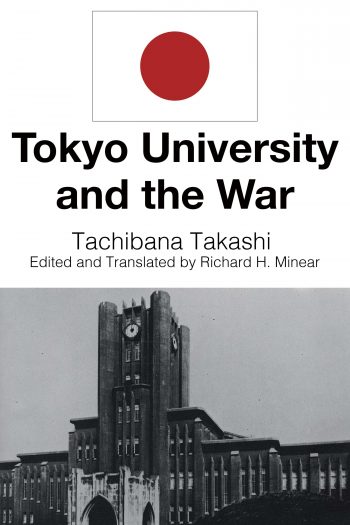 Book Description: Tachibana Takashi analyzes the impact of World War II on Tokyo University and Tokyo University’s impact on the war: attacks from outside, faculty politics and purges, institutional expansion, the sacrifice of liberal arts students to the war machine, and heroic dissenting professors who tried in vain to bring the war to an early end.

Tachibana Takashi (b. 1940 and himself a graduate of Tokyo University) traces the relations between the Japanese imperial state and Tokyo University, its showcase educational institution. He focuses on the era 1930-1945, including rightist politics, war mobilization, Pearl Harbor, and utter defeat. He describes attacks on the university’s patriotism by outside and inside agitators, factional fighting within the university (his focus is on the faculties of Economics and Law), collaborationism or the retreat into silence of many faculty. He lauds the heroism of the few who dissented, some of whom (Nambara Shigeru, Tanaka Kōtarō, Yanaihara Tadao) went on to play major roles in Japan’s postwar era.

This book was cloned from a source that is no longer available. The source URL was https://press.rebus.community/theemperorandtokyouniversity. This book may differ from the original.

Tokyo University and the War by Tachibana Takashi & Richard H. Minear is licensed under a Creative Commons Attribution 4.0 International License, except where otherwise noted.

Tokyo University and the War by Tachibana Takashi & Richard H. Minear is licensed under a Creative Commons Attribution 4.0 International License, except where otherwise noted.